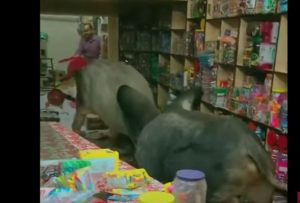 In case you missed this video you can watch it now. It shows an epic fight between to bulls though in the wrong venue.

A viral video shows the moment two bulls that were fighting in a street in India took their fight into a grocery store, trapping the shop owner while they ransacked the store as part of the brutal fight.

Though the video was posted two months ago, it is still terrifying especially as the man tries to scare the two bulls away using a plastic chair.

Bulls, cows and pigs move freely and calmly in the streets of India, especially Northern India because they know they won’t be killed and eaten. These animals are used to human presence and traffic movement in India and don’t ordinarily react and are considered benign. But there are rare incidents of violence among them just like is seen in this video especially when they engage in fights among them. Cows are considered by a section of the Indian society as a sacred symbol of life that should be protected and revered. This is why you find them roaming the streets calmly and fearlessly.

Saxon is a prolific writer with passion for the unusual. I believe the bizarre world is always exciting so keeping you up to date with such stories is my pleasure
Previous Watch as Indian man dances, sings happily with live python tied around his head (Video)
Next Viral Video: Wild horses chased by grizzly bear run for their lives