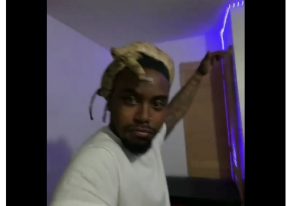 His dance moves are very exciting and he sang impressively well but what causes a strange distraction in the video is the reptile he tied around his head while singing and dancing.

A video has surfaced online showing an Indian man dancing happily with a huge Python tied around his head went viral.

In the video going viral and receiving a lot of reactions, the man is seen standing in a background that looks like his living room.

The footage shows him dancing to their popular songs and to the surprise of many, the camera captured the snake tied around his head.

The snake which looked like his pet seemed to be playing along as the man danced happily and beautifully to the song with the reptile still tied around his head.

The snake was seen moving and changing its direction from one end to the other but never fell.

This video is both terrifying and intriguing as a result of which it has gone viral. You can hardly watch it just once.

Saxon is a prolific writer with passion for the unusual. I believe the bizarre world is always exciting so keeping you up to date with such stories is my pleasure
Previous Cell phone blasts in man’s hand, sets him ablaze while receiving call for four hours non-stop (Video)
Next Shop Owner Terrified as Two Fighting Bulls Crash Into His Shop, Ransack Grocery (Viral Video)