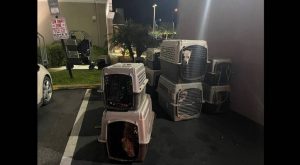 The dogs definitely landed in good hands as they ended up in nice hotels rooms far better than the vans they were traveling in.

An accident involving 17 dogs took a surprising turn when police officers who arrived at the scene decided to book the terrified dogs into a nice hotel for the night.

This incident occurred at about 2 a.m. on Sunday, June 5, at the intersection of South Pine Avenue and Southwest Fort King Street in Ocala, about 80 miles northwest of Orlando, Florida.

“The van was a dog transport and was delivering multiple kenneled #dogs of all sizes to various owners across the US,” the Ocala Police Department said in a news release. 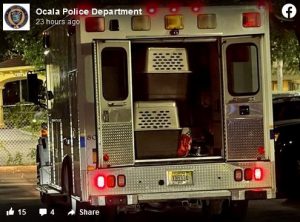 “The van was inoperable due to the damage and the transport drivers had no other form of transportation. … A plan was devised.”

In the hours that followed, the department’s “midnight shift” was able to find a hotel that had enough space for the drivers and the 17 dogs.

“Next, a motorcade of patrol cars, including our negotiator ambulance, was assembled to transport them all to the local hotel safely until they could procure transportation the following day,” the department said.

“No one involved in the crash was seriously injured and all the dogs appear to be fine.” A photo shows the dogs arrived by ambulance before being taken to their room on luggage racks.

No one knows yet if the dogs were then allowed to order room service as well.

Retro K9 is the company that operated the transport service that operated. This company thanked police on Facebook, along with a note saying the dogs were safe at the hotel.

Police did not disclose who is footing the bill for the hotel, but a fundraiser was launched late Sunday to help the company recover “unforeseen expenses” for the company.

Thousands have reacted and commented on the police department’s social media post about the incident, with many praising the officers for going the extra mile.

“This is the kindest thing I have read in a long time!” Wendy Nelson wrote.

“Great job thinking outside of the box,” Kristen Dreyer said.

(with reports from BND)

Saxon is a prolific writer with passion for the unusual. I believe the bizarre world is always exciting so keeping you up to date with such stories is my pleasure
Previous Man Begs As Lady Confronts Him For Sexually Harassing Her In A Bus (Video)
Next Wedding guests go hungry after bride spent entire £4k catering budget on Mickey Mouse appearance and hosted wedding with no food