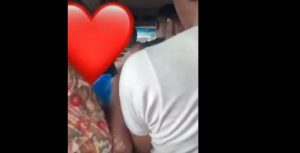 If this were a child or far younger girl she probably would have kept quiet out of fear for this man to have his way. But he tried it on a grown up and enlightened girl and met his downfall.

A video has surfaced online showing a man pleading for forgiveness after he was confronted by a lady who alleged that he sexually harassed her on a commercial bus in Lagos, Nigeria.

In the video the lady that was harassed could be heard shouting at the man, saying she warned him to stop but he continued. Towards the end of the video she became emotional and said if a little girl was involved she would be afraid to talk and the man would have his way. The man could be heard pleading for forgiveness but the lady was not buying that as her anger grew.

Twitter user named Efyaa, who shared the incident on the micro-blogging platform stated that the incident happened on Tuesday, May 17, on a bus from Ogba to the Obalende area of the state.

She noted that the man was touching a female passenger who sat beside him on the bus inappropriately when she gave him a slap on the face and he tried to retaliate.

Efyaa said when all the other female passengers on the bus accosted him, the man admitted harassing the lady and started begging for forgiveness.

Efyaa wrote this as she shared a photo of the man and video proof,

“Today I entered a bus with a sexual predator and I’ll appreciate if you could to please repost this. You’ll know why amplifying this tweet is very important by the end of this thread. Here’s the face of said predator.

Another video proof of him begging the lady- He eventually admitted guilt and was saying he’s using God to beg us. Oh yeah, next time think about God before you do something so stupid!.
We couldn’t get his name by the end of our trip and he sped away. All the men in the bus who could overpower him said nothing and let him leave. The driver said nothing as well. When the lady admonished the driver, a passenger (man) in the front insulted her to say.. See the body you’re using to shout sef’. Let that sit in! A lady in the bus gave her contact of someone in human rights but with so little info about him. It might be hard to find him.”

Saxon is a prolific writer with passion for the unusual. I believe the bizarre world is always exciting so keeping you up to date with such stories is my pleasure
Previous SUV Driver hits Biker On Delhi Road After An Argument (Shocking Video)
Next Kind Florida cops check 17 frightened dogs into hotel after they survived terrible van crash