Overloaded Bus With Passengers On The Roof Spotted on Highway (Video) 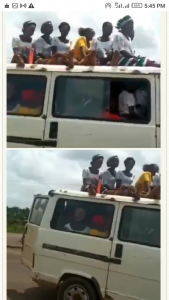 A video which is going viral on social media captured the moment an overloaded bus was carrying passengers on the roof. The passengers on the roof are all women and it was clear there was nothing they were holding to ensure their safety.
The incident happened in Nigeria and the bus was intercepted by the Federal Road Safety Corp (FRSC) officials.
It was gathered from the video that the vehicle was conveying all passengers to a funeral and one FRSC official could be heard asking the driver whether it was right to risk the lives of the passengers on the roof just because they were going for a funeral.
The women on the roof looked unaware of the risk their positions posed to them as their interest was probably just to get to the venue of the funeral.
The officials the asked the driver to park by the road side.
It is not clear whether he was punished for this offence

The officials the asked the driver to park by the road side.
It is not clear whether he was punished for this offence.

Vanko is a cheerful writer whose enthusiasm for unusual stories is inspiring.
Previous Terrifying footage shows moment of mass shooting in Philadelphia
Next Indian man chops off wife’s hand to prevent her from taking government nursing job