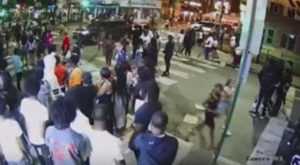 There was commotion in Philadelphia after multiple shootings were recorded in the busy South Street area of the city around midnight on Saturday, June 4. This area has a lot of bars and restaurants. Two men and a woman were killed, officials said.

A surveillance video from the shooting showed people on a crowded street running in panic in the closing moments of the short clip, presumably after gun shots were fired. The clip had no audio. This video has been verified by Reuters using geolocation.

Eyewitness footage showed people on a crowded street running to safety and police vehicles arriving in the scene, presumably after gun shots were fired.

Philadelphia police officers observed “several active shooters shooting into the crowd,” with one officer “within about 10 to 15 yards” of an individual firing into the crowd, police said. That officer fired at the suspect, they said.

The shooters are still on the run. Two handguns were recovered at the scene, including one with an extended magazine, officials said added.

There were no immediate arrests.

Saxon is a prolific writer with passion for the unusual. I believe the bizarre world is always exciting so keeping you up to date with such stories is my pleasure
Previous Wedding guests go hungry after bride spent entire £4k catering budget on Mickey Mouse appearance and hosted wedding with no food
Next Overloaded Bus With Passengers On The Roof Spotted on Highway (Video)