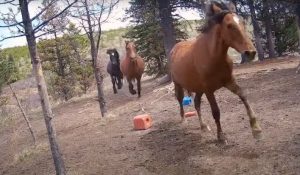 A video is going viral online showing the moment wild horses running for their lives from a grizzly bear..

The scene was captured by trail cameras in Alberta, Canada.

This video was uploaded on Thursday by Viral Hog. An accompanying footage shows the horses charge past one camera with the bear following at full sprint, perhaps 40 yards behind. A second view picks up the chase, with the bear trying to close ground.

The video shows a young horse, perhaps the target, among the horses running and all of the animals look tired.

Viral hog stated that the grizzly bear was a mom with two cubs, and that the chase occurred May 26 in Central Alberta.

According to the nonprofit that captured the footage: “These trail cameras are part of a large network of cameras collecting video data on the plight and mortality of Alberta’s Wild Horses, from both natural causes and large predators.

“Help Alberta Wildies Society has been conducting this research since 2014, and uses the data to promote worldwide awareness about our threatened population of Wild Horses here in Alberta, Canada.”

“The next time someone tells you that the Wild Horses have no natural predators, send them to me. We are losing a lot of horses this year, sooner and quicker than in past years. Not just the foals. Adults also.”

There were mixed reactions from people expressing emotions on the comments to the video, ranging from sadness to anger. The most extreme sentiments called for the culling of grizzly bears, which are native to the region and the focus of an ongoing population recovery effort.

The video did not show whether the bear was successful in this chase.

Saxon is a prolific writer with passion for the unusual. I believe the bizarre world is always exciting so keeping you up to date with such stories is my pleasure
Previous Shop Owner Terrified as Two Fighting Bulls Crash Into His Shop, Ransack Grocery (Viral Video)
Next Stunned boxer fights non-existent opponent (Shocking Video)