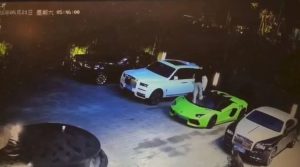 He was drunk when he did all the damage but by the time his eyes cleared he realized the level of trouble he had gotten himself into.

A 24-year-old man from Chengdu, China has landed in serious trouble that would require him to pay at least $150,000 in repair costs after trampling and vandalizing four luxury vehicles in a hotel parking lot while drunk.

This happened in the evening of May 21, when the accused was recorded kicking and trampling on a number of luxury vehicles despite his girlfriend’s best efforts to stop him.

No one could say exactly what prompted this sort of reaction from the perpetrator, referred to only as Gao by Chinese media, but considering that he looks very drunk, a logical explanation may not even exist. The damaged cars include a Lamborghini and two Rolls Royces, and the repair costs have been estimated at over 1 million yuan ($150,000).

Gao’s vandalism was discovered by the staff at a luxury hotel in Chengdu, China’s Sichuan province.

When owners of the vehicles lodged complaints to the hotel, they reviewed the security camera footage and discovered the drunk man taking his anger out on the cars despite his girlfriend’s efforts to stop him.

Chinese media reports that the next morning, after sobering up and learning of what he had done, Gao went to a police station and turned himself in.

He has been arrested and criminally charged with vandalism. It’s not clear if he’ll get any prison time, but he will most definitely have to cover reparation costs for the damaged luxury cars.

Vanko is a cheerful writer whose enthusiasm for unusual stories is inspiring.
Previous Nude couple seen riding bike along busy street in England while waving at onlookers
Next Professional cyclist mistakenly smashes into his wife as she took pictures of him after winning race, lands her in hospital (Video)