Crazy Video Shows Orangutan Attacking A Man In A Zoo 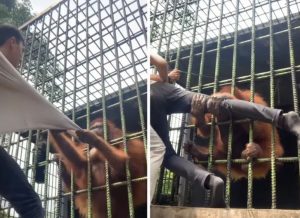 Just don’t mess with wild animals whether they’re in a cage or free in the open as this young man learnt in a terrifying manner.

An Orangutan has been spotted in a viral video attacking one of those who turned up at a zoo.

The video begins by showing the man getting close to the cage. The orangutan quickly grabs him by the shirt, pulling him closer and closer, and tried biting him.

At one point, the animal grabs the man’s leg and flipped him horizontally. It was not clear whether the orangutan bit him at that point. The man however got lucky as he was saved by his friends.

I’m sure he insulted the Orangutans’s mother because what is this😂😂 pic.twitter.com/9BxBy6gis6

Saxon is a prolific writer with passion for the unusual. I believe the bizarre world is always exciting so keeping you up to date with such stories is my pleasure
Previous Egypt sentences teenage TikTok star to 1 year in prison over “obscene” TikTok video (Watch Video)
Next Terrifying Video Shows Man Allegedly Shove 52-Year-Old Woman Onto Subway Tracks in New York