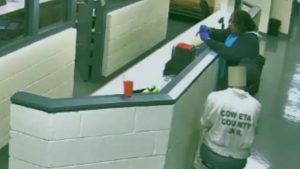 A nurse in Coweta County, Georgia, USA is facing felony judge charges after she was caught on camera allegedly sneaking drugs into the county’s jail.

The nurse expected to improve the health of the inmates instead by keeping away drugs from the county jail has been charged with dealing drugs that she allegedly smuggled in.

In a video obtained by FOX 5 News, nurse Shaneika Roberts in the scrubs speaks to a jail inmate at a counter

Coweta County Sheriff’s Office said the subtle move was spotted by trained eyes and investigators who say they were tipped to trouble.

The video shows the inmate as he allegedly reaches into the Roberts’ pocket and retrieves something and then drops it down into the front of his jail jumpsuit. 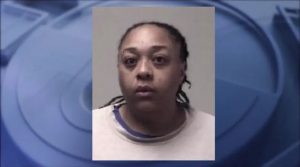 In the video, deputies say you can see the contraband fall all the way down the inside of the inmate’s pant leg.

Deputies say they searched that inmate’s cell and found the drugs that Roberts allegedly smuggled into the jail.

The sheriff’s office says Roberts was a Licensed Practical Nurse that had worked in the jail for three years. They say they have charged her with possession of marijuana with intent to distribute and crossing the guard line with contraband.

Deputies say a search of that inmates jail pod turned up marijuana, meth, and fentanyl as well as other contraband.

For now Roberts faces charges only related to marijuana.

The sheriff’s office says Roberts could face additional charges, and they expect more arrests to be made as the investigation continues.

(With reports from FOx5)

Saxon is a prolific writer with passion for the unusual. I believe the bizarre world is always exciting so keeping you up to date with such stories is my pleasure
Previous Man accused of murdering Atlanta rapper Trouble surrenders to police (Photos)
Next ‘I’m not going to help you’ – Police officers stand by and watch as man begs for help while struggling in lake before drowning to death (Video)