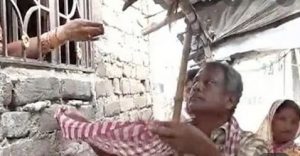 An elderly couple in India has engaged in a pathetic action to get the corpse of their deceased son from the hospital.

The couple went out in the streets of Bihar’s Samastipur seeking money to “get their son’s body released from a government hospital”.

A hospital employee allegedly asked the couple for 50,000 Rupees to release the body of their son.

Since the couple does not have the money, they are walking around the city “begging for money”.

This video of the couple begging for money in the street has gone viral on social media.

The father said that his son that gone missing a few days ago.

“Some time ago my son had gone missing. Now, we’ve received a call that my son’s body is at Sadar Hospital, Samastipur. A hospital employee has asked for 50,000 Rupees to release my son’s body. We’re poor people, how can we pay this amount?,” Mahesh Thakur told ANI.

Reports have it that most of the health workers at the hospital are on contract and often do not get their salaries on time. There have been several instances where the staff has taken money from relatives of patients.

This story sounds embarrassing to the hospital and its authorities have said that strict action will be taken in the matter. “Those found responsible will not be spared. This is a shame on humanity,” said Dr SK Chaudhary, civil surgeon, Samastipur.

Saxon is a prolific writer with passion for the unusual. I believe the bizarre world is always exciting so keeping you up to date with such stories is my pleasure
Previous Watch: Chinese Toddlers’ Physical Education Routine Goes Viral, Internet is Amazed (Video)
Next Man dressed like a woman enters College of Nursing female hostel to allegedly steal