Home / Africa / Outrage as businessman Jaco Swart, who was filmed beating his wife to a pulp, avoids jail after judge fined him only R20K (Terrifying video)

Outrage as businessman Jaco Swart, who was filmed beating his wife to a pulp, avoids jail after judge fined him only R20K (Terrifying video) 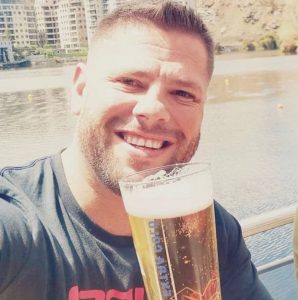 There is huge outrage especially on social media over this sentence seen by many as too light for the offence and capable of encouraging gender-based violence.

A South African man, Jaco Swart, who was filmed brutally beating his wife to a pulp, has been fined R20K (about $1,300), causing outrage for the offence. The verdict also means he has avoided going to jail for the offence.

People are unhappy with this sentence even as a video of the assault has been shared online. Many people have slammed the justice system that allowed the wife beater to walk free.

Swart, who often refers to himself as “hooligan” on social media, was captured on CCTV beating his estranged wife Nicoleen.

He carried out the savage attacks at his business premises, sometimes in full view of staff.

Some of the vicious attacks took place in front of the couple’s two children. 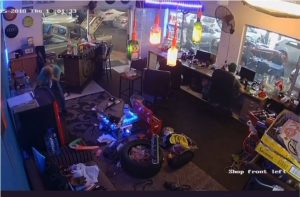 The prosecutor for the National Prosecuting Authority (NPA) applied to have the surveillance footage admitted in court for the purposes of aggravation of sentence, but the court disallowed this after the defence questioned its authenticity.

Despite the existence of the footage, the judge stunned the court by sparing Jaco Swart a jail sentence on Tuesday, June 7.

Swart pleaded guilty to assaulting his estranged wife, Nicoleen Swart. He was facing a charge of assault with the intent to inflict grievous bodily harm.

According to AfriForum’s Private Prosecution Unit, which supported Nicoleen in the case, Swart pleaded guilty to the two counts after facing an unassailable case, which included surveillance footage of his violent criminal acts.

The assault case had previously been struck off the roll by the NPA after which the estranged wife, Nicoleen, approached lobby group AfriForum for assistance.

AfriForum then sought a private prosecution.

Following Jaco Swart’s guilty plea, the Pretoria North Regional Court sentenced him to a R20 000 fine, and a three-year prison sentence, suspended for a period of five years.

This means he has avoided incarceration, despite the existence of video evidence.

Nicoleen has expressed her disappointment with the sentencing, but says she is “delighted” with the conviction.

Following the sentencing, which many consider unjust, South Africans took to various social media accounts to call out the justice system that allows abusers to walk free. 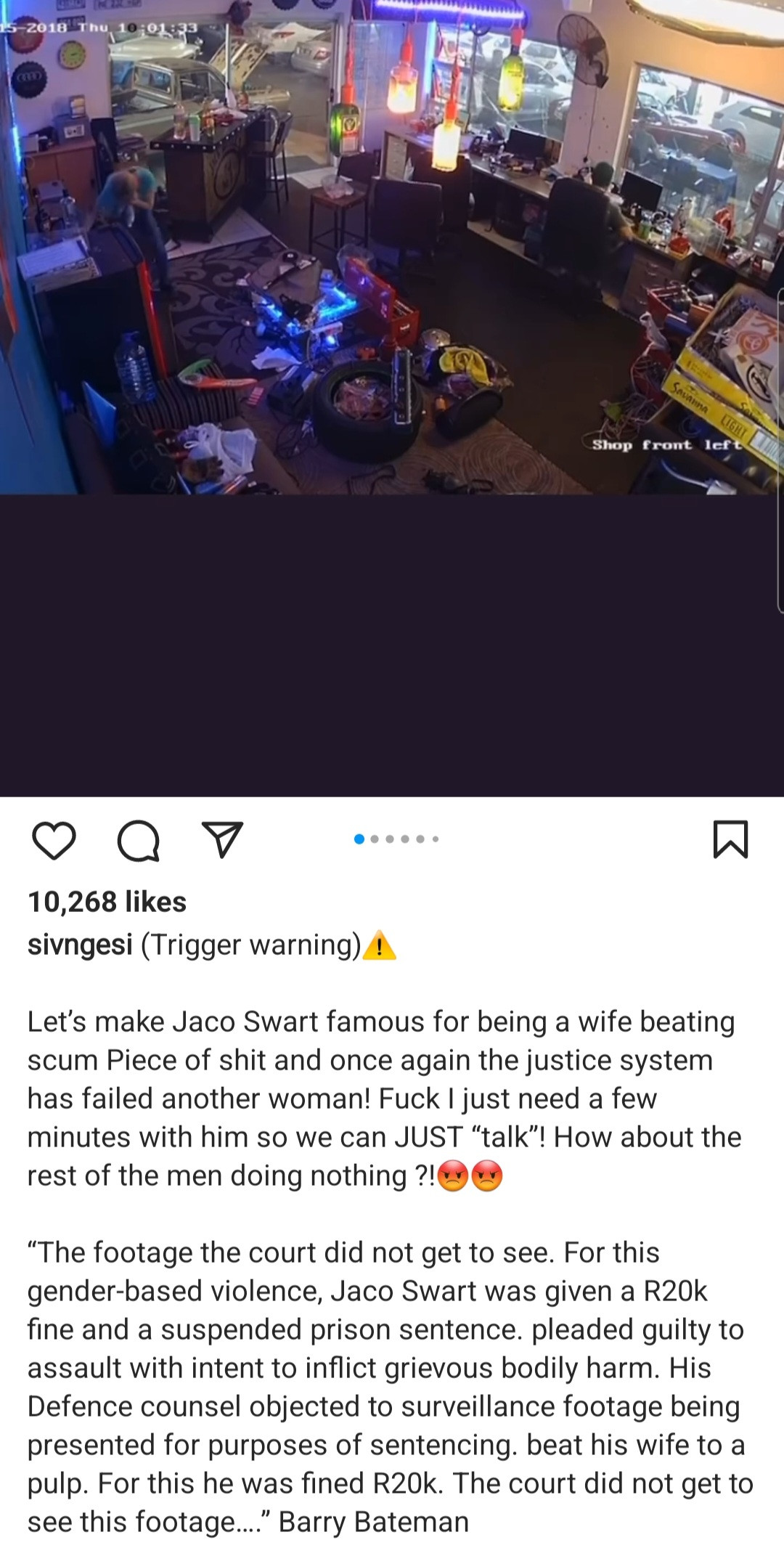 There were other social media users who noted that this sentence will only worsen gender-based violence, which is already rife in South Africa. 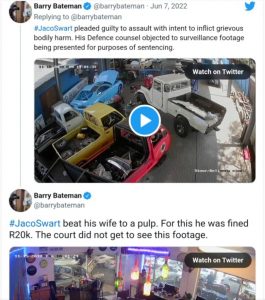 Some Twitter users are protesting the light sentence Jaco got by sharing photos of South African women brutally murdered by their significant others over the years.

Swipe to watch videos of Jaco assaulting his estranged wife.

Saxon is a prolific writer with passion for the unusual. I believe the bizarre world is always exciting so keeping you up to date with such stories is my pleasure
Previous Househunter shocked as he’s shown a house with kitchen, toilet, and bathroom sharing the same space in Lekki (video)
Next Man arrested for claiming he knows where people can sell their toes in Zimbabwe