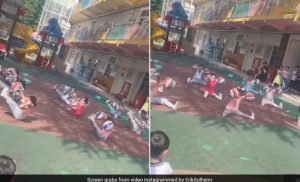 This is unbelievably amazing, coming from toddlers though their trainers also need to receive exceptional praises.

A video which is currently going viral on the internet shows Chinese toddlers moving in perfect coordination during a physical education class.

The clip which was shared on Twitter by former Norwegian diplomat, Erik Solheim, shows a group of young Chinese students showing off their athletic abilities.

The young kids, who appear to be around five to six years old, are seen sitting outside, moving in perfect unison while bouncing a basketball in each hand. While sharing the video, Mr Solheim wrote, “WOW! Physical education class of kindergarten.”

The viral video begins by showing the Chinese kids bouncing two balls with both hands as they exercise their legs and move their bodies in perfect coordination. They flawlessly continue to bounce the basketballs as they shift their legs from side to side. At the end of the clip, the children are also seen suspending their legs in the air as they bounce the balls without hesitation or mistakes.

The internet was taken by storm after this video surfaced online, leaving Twitter users impressed. While one user described the toddlers as “small ninjas,” another stated that they are “so talented”.

“The world really isn’t going to be able to stop China. The focus is crazy,” jokingly wrote one Twitter user. “Core discipline and coordination. Something that is good for all schools. It’s why they have such self-discipline and smarts,” said another. A third user-added, “The reason why China tops the Olympics medal list.”

Saxon is a prolific writer with passion for the unusual. I believe the bizarre world is always exciting so keeping you up to date with such stories is my pleasure
Previous Video: Bear Charges at Charges at Man While Clicking Photos
Next Indian Couple Begs For Money To Pay “Bribe” To Hospital For Dead Son’s Corpse to Be Released (Video)