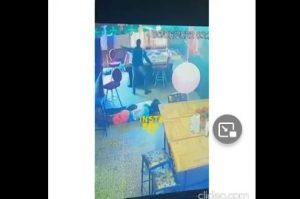 A video which is currently going viral online shows the moment an armed robber was dancing during an operation.

The location of this incident could not be ascertained from the video.

It begins by showing some people lying face down apparently based on the instructions of the armed robber. Then a masked person is shown picking up something from the victims on the floor, takes some steps across the room and begins to dance to music tunes which could not be heard from the video. It looks like the video was recorded frrom the CCTV screen by someone else using a phone.

Vanko is a cheerful writer whose enthusiasm for unusual stories is inspiring.
Previous Women traditionalists summon ‘Ogun’ (god of iron and war) to get justice for worshippers killed by terrorists in a Catholic church (video)
Next Man captured on camera forcefully brushing his wife’s teeth and beating her (video)