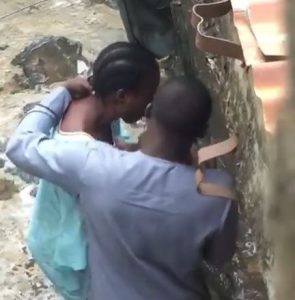 A man has been captured on camera forcefully brushing his wife’s teeth and beating her as she resisted allowing him do so for too long. The incident took place in Lagos, Nigeria.

The lady said to be a mother of three has been identified as Zahidat.

Instagram user, @PJ_Somie who posted the video said the abuse has been going on for over 8years and the lady needs justice because she’s drained mentally, physically, emotionally and can’t talk any longer.

This is Zahidat a mother of three the man brushing her (teeth) is her husband; this has been going on for over 8years now she needs justice please she’s drained mentally, physically, and emotionally she can’t talk any longer only God knows if this man has cut her tongue this is just wickedness this man needs to be put in his place she really needs help please.

Some social media users are of the view that the woman may be mentally challenged and this could be the man trying to keep his wife’s hygiene intact. Some others say that only a visit to the house of this couple would confirm exactly what was wrong. They live somewhere in Agege, Lagos, Nigeria.

Saxon is a prolific writer with passion for the unusual. I believe the bizarre world is always exciting so keeping you up to date with such stories is my pleasure
Previous CCTV captures armed robber dancing during an operation (Viral video)
Next Woman wins £4.1m payout from car insurance company after catching STD while having sex in partner’s car