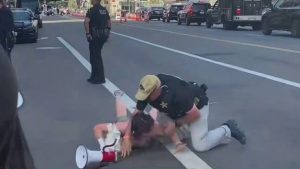 A video going viral on social media shows the moment a protester in Los Angeles was tackled by the Secret Service on Wednesday, June 8, after she walked out onto the street and approached US President Joe Biden’s motorcade.

President Biden was in downtown L.A. for the ninth Summit of the Americas. The woman had moved onto a blocked-off street with a bullhorn and was quickly tackled by a secret service
agent.

The video shows the secret service agent as he tackled the woman to the ground, slapped her on the face and attempted to handcuff her.

The protester, who resisted officers during her arrest and ripped off the tackling officer’s hat and glasses, appeared to be advocating for abortion rights. 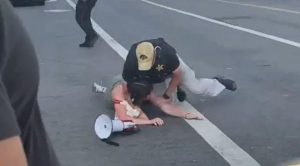 “Get the f— off me!” she could be heard saying while on the ground being handcuffed. She then shouted “An abortion ban will not stop abortions. Only safe ones.”

Anthony Guglielmi Chief of Communications for the United States Secret Service, put out a statement after the arrest.

“Shortly after 5:00 pm, an adult female entered a restricted roadway along a motorcade route on Chick Hearn Ct in Los Angeles,” the statement said. “As the woman approached passing vehicles, a United States Secret Service agent swiftly removed her from the roadway and placed her into custody. There was no impact to the motorcade movement or our protectees. Our investigation into this incident is ongoing.”

Saxon is a prolific writer with passion for the unusual. I believe the bizarre world is always exciting so keeping you up to date with such stories is my pleasure
Previous Woman wins £4.1m payout from car insurance company after catching STD while having sex in partner’s car
Next Journalist attacked by armed robbers fights back and overpowers one of them (video)