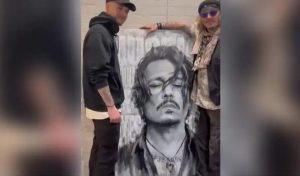 You might say there was nothing special in what he did but then it was Johnny Depp so it has gone viral.

Johnny Depp won the defamation case against his ex-wife, Amber Heard, last week and as a gesture of support, an artist created a black and white portrait of the actor and gifted it to him.

A viral video posted on Instagram shows Mr Depp appreciating the painting and also praising the artist. In the clip, the Pirates of The Caribbean actor even sent a message of thanks to all of his fans and said, “Nothing would have been possible without you. Thank you and bless you all.”

“WE GOT MY VIRAL PAINTING TO JOHNNY DEPP! Thank you so much, everyone!” read the caption of the post shared by Scott R Greenwood – the artist who painted the portrait of Johnny Depp.

The video shows Mr Greenwood presenting the piece to Mr Depp. The actor is then heard admiring and appreciating the tiniest details in the painting. Mr Depp is also seen giving the artist a hug and signing some prints of the piece.

Saxon is a prolific writer with passion for the unusual. I believe the bizarre world is always exciting so keeping you up to date with such stories is my pleasure
Previous Watch As Duck Plays Hide And Seek With Tiger Sneaking Up On It (Viral Video)
Next Woman reveals she has to bath four times a day because she has a rare condition that makes her smell like fish