Angry fans accuse opponent of late South African boxer of using ‘witchcraft’ to kill him, he says he is having suicidal thoughts following vile abuse online 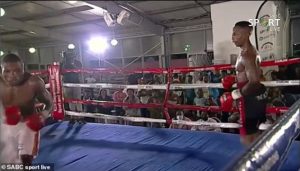 He is really troubled because of online abuse, including allegations that he used ‘voodoo’ locally known as umuthi in South Africa.

The opponent of the South African boxer who tragically died after their fight has admitted that he is having suicidal thoughts to take his life as a result of vile abuse he’s been receiving online following the bout.

Simiso Buthelezi died at the age of 24, two days after he was filmed disorientated and swinging into thin air during a title fight on Sunday, June 5, in Durban.

The boxer was fighting his opponent, Siphesihle Mntungwa in a WBF African lightweight title fight when he became disorientated in the final seconds of the last round.

It was gathered that Buthelezi was just close to victory as he had his opponent through the ropes before he lost comprehension of the fight.

Quick intervention by the referee led to the end the fight after he noticed something was wrong. 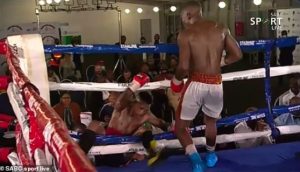 It was later confirmed that he suffered bleeding in the brain following the fight and died in the hospital.

His opponent, Mntungwa has now revealed that he has received vitriolic abuse online – with trolls branding him a ‘killer’.

‘I came into heavy criticism and received insults on social media platforms when Simiso was hospitalised; it has taken another level now that he has passed away,’ he told Sowetan Live.

‘I just can’t take it anymore. One thing is left for me – I am going to kill myself. Even my neighbours have posted very ugly messages about me on social media. I am no longer safe.

‘I did not kill Simiso; we may have been involved in a boxing fight but it was not a matter of life and death. All I wanted was to win the title, which maybe was going to help change my life and that of my family.

‘I am the only one working at home, where I stay with my young brother, my aunt and her children. My mother died when I was four; my father is still alive but we don’t stay with him.

‘So, winning that title was going to help me financially. But people have branded me a killer. It could have been me.

‘Without doubt Simiso’s family is going through pain like any other family. Simiso has just graduated [with a degree in botany and zoology]. Who knows his family may have even sold their cows to make sure he finished his studies. It is sad and very painful, but I did not go in that boxing with an intention to kill him.’

Mntungwa received the bulk of the heavy blows throughout the fight, and it has been suggested that Buthelezi may have entered the ring with a pre-existing injury.

‘He is under pressure from social media messages,’ Mntungwa’s trainer, Mmeli Mkhize, said. ‘People have their own beliefs such as claims that we used umuthi and that is untrue. We will not even be able to attend the funeral because we are scared.’

Saxon is a prolific writer with passion for the unusual. I believe the bizarre world is always exciting so keeping you up to date with such stories is my pleasure
Previous Watch as Britney Spears’ ex husband, Jason Alexander, crashes her wedding and gets arrested (video)
Next Lady with 12-Inch-long fingernails She Has Grown for 30 Years Shares How She Cooks with Them (Video)