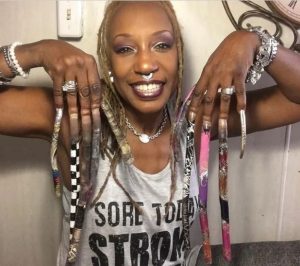 Despite the barrage of criticisms she receives over this decision, 59-year-old Cordelia says the best way she could express herself is through her nails which are currently 12 inches long.

The Virginia resident in the US became a TikTok sensation in the middle of the pandemic when she shared a video of her washing the nails.

While speaking on how she does her daily chores with her nails in an interview shared by Hooked on The Look, Cordelia revealed that she drew inspiration to keep them from her mum who had long nails herself.

In the past she used to keep her bails at 16 inches but they are 12 inches today. In addition to the fame her nails have brought her, Cordelia uses them as canvas for artworks.

This decision to start keeping her nails became a reality in 1989 when she began to grow them.

Many people have criticized her for the nails with the woman receiving negative comments on social media every now and then but she is unperturbed.

Cordelia stated that the attention she in fact gets with having super long nails is something she cherishes.

She says she uses her knuckles when performing daily tasks even as she has vowed never to cut them. 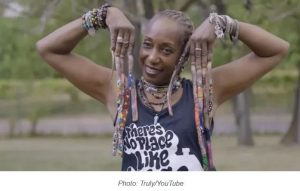 “The best thing about having the super long nails is the attention,” Cordelia told Truly, adding that the worst thing about her nails is the disrespectful questions that people sometimes ask her, like how she eats or how she takes care of herself with those fingernails.

The Indiana native claims that over the 30 years of growing her fingernails, she has taught herself to perform basically all daily tasks without damaging her keratinous treasures. She has learned how to safely write, drive a car, and hold things in her hands without her nails getting in the way.

Cordelia’s four fingers, excluding her thumb, are tucked back against her arm, and this makes it easy to do tasks like washing plates, cooking and other chores.

Saxon is a prolific writer with passion for the unusual. I believe the bizarre world is always exciting so keeping you up to date with such stories is my pleasure
Previous Angry fans accuse opponent of late South African boxer of using ‘witchcraft’ to kill him, he says he is having suicidal thoughts following vile abuse online
Next TikTok star, Cooper Noriega, 19, is found dead in Los Angeles mall parking lot hours after posting video about dying young