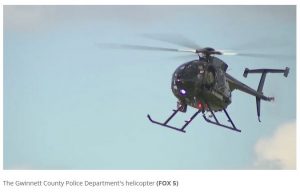 A man in Lawrenceville has been arrested for pointing a laser at a police helicopter.

This was revealed by officials with the Gwinnett County Police Department who said their air unit was conducting training exercises with the SWAT team at the Gwinnett Police Training Center when a green laser hit the cockpit of the aircraft.

The incident of the laser strike was captured on video.

Police pilot Markus Lapitsky was manning the controls during a training exercise with the SWAT team when he noticed the green nuisance. 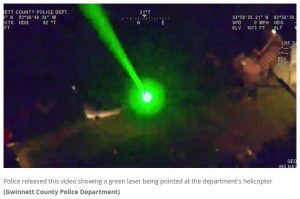 “Your heart sinks a little bit because it’s not expected. You are doing your scans and you start second guessing and thinking,” Markus Lapitsky said.

“First and foremost, after it hits the windscreen, it hits the cockpit, and it blinds us, and now I can’t see the gauges or instruments,” Lapitsky said.

Advanced technology has made it possible for those in the sky to track where the laser’s coming from.

“I just followed the green laser and followed it back to where the subject was holding it and I got an address,” Lapitsky said.

The helicopter’s crew pinpointed the source of the laser and sent police to investigate. After prompt investigations officers arrested 30-year-old Nedzad Mehic and charged him with pointing a laser at an aircraft. 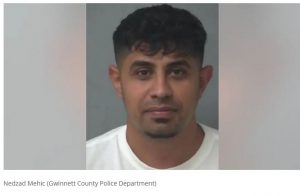 FOX 5 spoke with Mehic who says he never intended to cause harm and was just having fun with his family. He said he would never have pointed the laser if he knew it would have reached into the cockpit.

“Pointing a laser at an aircraft is extremely dangerous because it can hinder the pilot’s ability to handle the aircraft as well as interfering with onboard equipment,” Gwinnett police said in a statement. “This activity is illegal due to the potential harm it can do to the pilots, the aircraft, and the general public.”

Mehic was booked into the Gwinnett County Jail.

His case has been referred to the FAA and the FBI Atlanta office.

“We all have families and we want to go home at the end of the day. Essentially for a toy that you can buy for 15 to 20 dollars on amazon that can put such great risk not just for us police pilots but all the aviators,” Lapitsky said.

(With reports from Fox5)

Saxon is a prolific writer with passion for the unusual. I believe the bizarre world is always exciting so keeping you up to date with such stories is my pleasure
Previous Hong Kong woman arrested after she was filmed having sex on balcony
Next Driver kills Elderly Man in Georgia While Trying to Reply Text