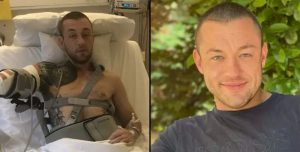 A botched bicep curl which left him with a flesh-eating bug has forced him to have his forearm amputated.

Gabriel McKenna-Lieschke, from Adelaide, Australia, was pumping iron when a 50kg weight caused his bicep to tear ‘clean off his elbow’, leaving him ‘screaming in pain’.

The situation got much worse for the civil engineering student as he needed an urgent surgery to fix back his bicep..

After surgery to reattach his bicep, his arm began swelling up, reaching three times its normal thickness, and he was rushed back to hospital.

Gabriel’s decline became dramatic, and before he knew it he had been placed in an induced coma.

It got to the extent that Gabriel began to fight for his life and his family were told to prepare for the worst.

The 29-yer-old who had relapsed into coma came back around in November 2020 but when he did, he had to contend with the fact he had lost his lower left arm due to the deadly flesh-eating bug, necrotising fasciitis.

“There’s a question about where the necrotising fasciitis actually came from,” Gabriel said.

“Nothing’s been settled with it yet but basically three days after the surgery, I was sitting around and my arm had swelled up to two or three times the thickness and was bright red. I think I acquired the necrotising fasciitis in the hospital.

“My dad was calling my friends and family because they’d told him they thought I was going to die, then it was a big surprise to everyone when I pulled through.”

He added: “When I look back at what I’ve been through, I feel very proud of myself.

“I feel extremely grateful more than anything that I have another chance at life, have the support of my family and friends and that I’m from a country where I’m able to pursue a dream like going to the Paralympics.”

Gabriel was in the coma for 10 days, during which period they amputated a section of his arm and removed dead skin from his chest and arm.

When he eventually came around, he said it took him three days to realise his arm was gone.

He recalled: “I was asleep for the whole thing. I had no idea what was going on and when I woke up, I didn’t even realised I’d lost my arm for three days.

“Unfortunately, I was on so many drugs it was like it hit me in the face. But at the same time, I wasn’t able to comprehend it properly because I was in such a haze.”

Now Gabriel is more determined than ever to get to peak fitness and enter the Paris Paralympics in two years’ time – where he hopes to race in the cycling team with the help of specialist prosthetics – and he has set up a GoFundMe to support this new dream.

He said: “I’m doing everything on my trainer in my living room.

“I’m trying to raise this money for the equipment. I have some funding to start it off but it’s not enough to get the high level of prosthetics I need and there’s bikes, equipment and training alone.

Saxon is a prolific writer with passion for the unusual. I believe the bizarre world is always exciting so keeping you up to date with such stories is my pleasure
Previous Driver kills Elderly Man in Georgia While Trying to Reply Text
Next Shark Sliced In Half Washes Up On Beach And Now People Are Wondering What Predator Attacked It