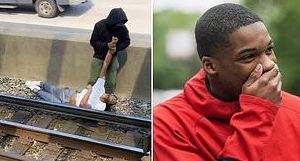 A 20-year-old Chicago man is currently trending as a true hero after rescued a man being electrocuted by a subway track.

The man has been honored with a car gift after he leaped into action to save the life of a man who fell on the subway’s deadly electrified rail.

Reports have it that the man had allegedly engaged in a fight and was struggling for his life after falling on the electric rail track.

The incident happened on Sunday June 5 and Anthony Perry had just exited a train when the man fell on the rail track. 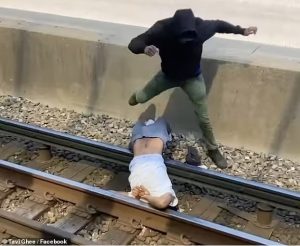 He saw the struggling man, he was faced with a decision – stay and watch him die or help out… Perry went to remove the man from the train racks despite the risk of being electrocuted.

With the help of another witness, Perry administered CPR to the man.

The incident occurred on at 3:30 p.m. at the 69th Street Red Line CTA station in the Greater Grand Crossing neighborhood in Chicago.

The man is now receiving treatment and will make a full recovery according to the Chicago police department.

On Wednesday, June 8, Anthony Perry was honored by a local community leader who awarded him a new car for his heroism. 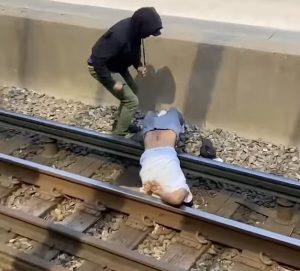 Perry told WGN TV about the moment he saved the man’s life:

‘I don’t think I was thinking about what could happen to me at the moment. It was more of what do I have to do to make the situation peaceful. I felt a little shock. I felt it all over my body actually, and then I just didn’t let that stop me.’

‘No one actually did anything, they just wanted to record’.

The shocking video shows the man’s body pulsating as the electricity of about 600 volts passes through his body.

Perry told Fox Chicago: ‘She was talking me through on what to do. I feel like that was an angel from God. I ended up doing chest compressions and turning him on his side until the fire department got there.’ 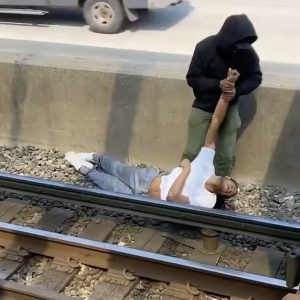 The man who filmed the event, Tavi Ghee, told ABC Chicago: ‘It was definitely surreal. That was an out-of-body experience.’

In an interview with CBS News, Perry described the scene saying: ‘I immediately noticed there was a fight because both guys got their dukes up – they were like putting their stuff down.’

He continued: ‘I could’ve kept walking, but I was like, you know what? I’m not going to keep walking – because God wouldn’t want me to do that, so I took action immediately.’
Perry added: ‘I was thinking about, if that was me in that situation, how would I want people to treat me? I’m just happy that the guy was alive, more than anything. I didn’t see myself as a hero, to be honest.’

READ ALSO: Child of newlyweds who were murdered in the woods is finally found after 40 years

After receiving the car gift for his heroism, Perry told the media: ‘Good does win. Good always wins’

Chicago Police Department Lieutenant Yolanda Irving said of Perry: ‘This is just a prime example of how a young man took it upon himself to jump in and do the right thing’

Watch the videos of the rescue and gift presentation below;

CTA rider Anthony Perry is being hailed as a hero after pulling an electrocuted man off the train tracks at the 69th Street Red Line station. (video from Facebook user Tavi Ghee June 5 at 4:38 PM)https://t.co/90e2yCKce4 pic.twitter.com/To7zcC0ixe

DRAMATIC VIDEO: A mass transit rider is being hailed a hero after pulling a man off the tracks at a Chicago station. Twenty-year-old Anthony Perry was honored with a ceremony and an amazing gift! ❤ https://t.co/pPEaKZD737 pic.twitter.com/5Sb6qsiawB

Saxon is a prolific writer with passion for the unusual. I believe the bizarre world is always exciting so keeping you up to date with such stories is my pleasure
Previous Leader of Mexican megachurch sentenced in US for child sex abuse
Next Woman arrested after landlady finds seven aborted fetuses in her room