Britney Spears’ first husband, Jason Alexander has been arrested after crashing her wedding.

Spears’ wedding to fiancé Sam Asghari was interrupted after Alexander livestreamed himself crashing her event on Thursday afternoon, June 9, at her California mansion.

Captain Cameron Henderson of Ventura county sheriff’s office said officers responded to a trespassing call after 2pm. He said the pop singer’s first husband, Jason Alexander, was detained at the site of the ceremony. 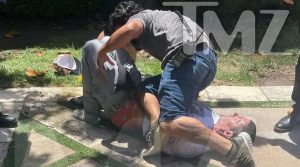 Before his arrest, Alexander broadcast himself on Instagram as he approached the rear of Spears’ home.

A photographer captured the moment Alexander was apprehended by security and pinned to the ground.

“She’s my first wife, my only wife,” said Alexander, who was briefly married to Spears – his childhood friend – in 2004. Their marriage lasted only 55 hours.

“I’m her first husband,” he continued in the video. “I’m here to crash the wedding.”

Britney Spears’ first husband on IG live as he tries to crash her wedding, he’s since been detained
🔗: https://t.co/mGtHf0lNNK pic.twitter.com/gkn9S4UYYW

Henderson says Alexander was arrested after officers noticed he had a warrant for his arrest in another county.

The Ventura Sheriff’s Department has charged him with trespassing, vandalism, and two batteries following a couple of altercations with Britney’s security guards.

Spears and her new partner Sam Asghari met on the set of a music video in 2016.

They announced their engagement in September last year, shortly before Spears won a legal battle with her family and was freed from a 13-year conservatorship in November.

Saxon is a prolific writer with passion for the unusual. I believe the bizarre world is always exciting so keeping you up to date with such stories is my pleasure
Previous Woman arrested after landlady finds seven aborted fetuses in her room
Next Angry fans accuse opponent of late South African boxer of using ‘witchcraft’ to kill him, he says he is having suicidal thoughts following vile abuse online