A mother bear miraculously survived after dramatically falling off a cliff while defending her cub from a nearly 500-pound male in Castile and Leon, Spain.

A video showing this incredible moment is gong viral on Twitter.

The jaw-dropping which was uploaded Tuesday by Spanish wildlife officials, begins with the mother bear standing protectively in front of her cub as a male heads down a mountain toward them. 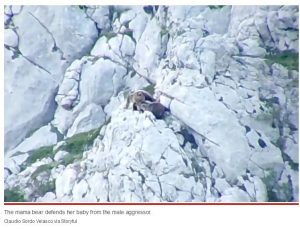 The male suddenly attacks and a tussle commences between the two of them on a ledge as the baby backs slowly away.

At one point during the high-altitude bout, the mother bear can be seen dangling over the side of the cliff.

The situation becomes worse after both bears tumble off the cliff in tandem and plummet nearly 100 feet down the mountainside, dramatically bouncing off several rocks on the way.

The female eventually rolls to a stop before slowly clambering to her feet. Meanwhile, her male assailant can be seen standing sluggishly at the mountain’s base, seemingly dazed by the fall.

Despite this huge fall, the heroic mother bear survived the plunge, but her male rival whom wildlife officials estimated to weigh around 478 pounds perished shortly thereafter, according to Spanish publication Comunicacion.

The bear’s death was confirmed by rangers, who discovered his body during a search of the area several days later, as seen in photos shared on Twitter.

Authorities subsequently found the mother sheltering in a cave and left food and water for her and her cub, Storyful reported.

Why the male bear attacked the mother and child is not yet clear but reports have it that brown bears are known to kill cubs of rival males in order to trigger oestrus – a period of fertility – in females, potentially convincing them to mate with the new suitor, Storyful reported.

Saxon is a prolific writer with passion for the unusual. I believe the bizarre world is always exciting so keeping you up to date with such stories is my pleasure
Previous Mum reveals how five bullies forced her 10 year old autistic son to lick their shoes so they won’t beat him
Next Terrifying moment killer dog named ‘Beast’ lunges at kids, attacks shoppers days before it mauled 10-year-old boy to death