It may have ended up a national tragedy with so many lives burnt to death if not for exceptional bravery shown by this driver.

A truck driver is receiving praises and hailed a hero after he risked his life to drive a burning truck out of a residential area in Agbarho town, Ughelli North local government area, Delta state, Nigeria.

The driver identified as Mr. Ejiro Otarigho, showed impressive bravery which apparently averted what would have destroyed sources of lives and properties in Agbarho town.

A video showing the incident has gone viral online.

The heroic story was shared on Facebook by the senior special assistant to the Delta State government, Agba Abraham confirmed that the driver is hail and healthy amid swimming in the inferno.

See how the driver risk his life to divert the truck from town to safe environment. I urge revelant Authority both National and State to act. I have spoken to Mr Ejiro, he is safe and healthy.

“I just spoke with the Heroic driver Mr Ejiro Otarigho, he is Hail and healthy. Let’s continue to share this post until relevant Agency act.”

Otarigho has became an instant hero following the incident that has gone viral on social media. 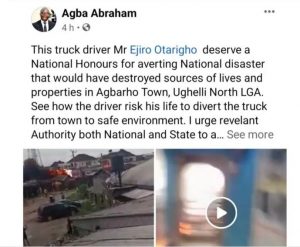 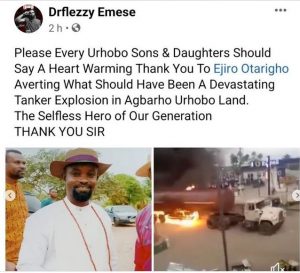 Saxon is a prolific writer with passion for the unusual. I believe the bizarre world is always exciting so keeping you up to date with such stories is my pleasure
Previous Watch As Car Runs Over Motorcyclist Trapping Rider, Good Samaritans Race to Lift Car off Him (Video)
Next Stunned man calls out Nigerian hotel for using local cooking pot as washbasin in bathroom (Photo)