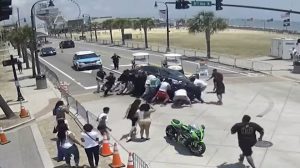 This is a dramatic video that shows there are still good people out there even in this era where many people would spend time recording an accident to upload to social media than rushing to assist the victim.

The jaw-dropping video shows a man and woman on a motorcycle as they were hit from behind by a car in the popular resort town of Myrtle Beach, South Carolina.

The woman tumbles off the bike and into the street, but the man, identified as Alex James, is trapped beneath the car.

In just a matter of seconds, total strangers rush to his aid.

About two-dozen people work together to lift the vehicle off James, as he is pulled to safety.

The video was posted on YouTube on June 3 by Inside Edition.

Afterwards, James took to Facebook to express his gratitude.

Saxon is a prolific writer with passion for the unusual. I believe the bizarre world is always exciting so keeping you up to date with such stories is my pleasure
Previous New York Court abruptly closed after hundreds of cockroaches were released during hearing
Next Truck driver hailed a hero as he risks his life to drive burning truck out of a residential area (Video)