Her friends claimed they came by that time of the night to reconcile but her ex did not find her attitude funny at all. The incident reportedly took place somewhere in Kenya.

A man has taken to Twitter to share a video of his ex-girlfriend and two of her friends creating a scene in the middle of the night after they invaded his compound.

The Twitter user named Omoke said his girlfriend, identified simply as GK, gained entrance into his compound by 4am to “talk” in the hopes of reconciling with him. 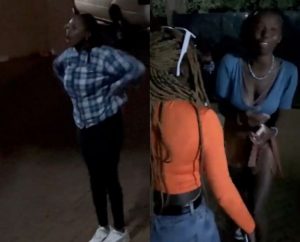 When she realized it didn’t work out as planned, she started screaming in his compound and breaking the flower pots.

The lady and her friends stayed in his compound until daybreak before leaving.

The video has gone viral on Twitter, with viewers condemning the young women’s irrational behavior.

The incident is believed to have played out in Kenya.

Swipe to see the videos below.

Saxon is a prolific writer with passion for the unusual. I believe the bizarre world is always exciting so keeping you up to date with such stories is my pleasure
Previous TikTok star, Cooper Noriega, 19, is found dead in Los Angeles mall parking lot hours after posting video about dying young
Next Mum reveals how five bullies forced her 10 year old autistic son to lick their shoes so they won’t beat him