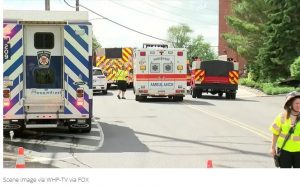 WHTM reports that authorities were called to help cut a hole in the tank so the two people could escape, though it’s unclear if there was chocolate in the tank at the time.

How they fell inside the tank has not been disclosed by authorities.

Fox5 reports that their condition was not immediately available.

FOX Television Stations has reached out to Mars Wrigley for a statement. A spokesperson told WHTM that they “are actively managing the situation.”

The factory makes M&Ms and Dove chocolate, among other products.

Saxon is a prolific writer with passion for the unusual. I believe the bizarre world is always exciting so keeping you up to date with such stories is my pleasure
Previous Cyclists ride naked in Mexico City for road safety
Next Fishermen stunned to find gigantic sex toy inside catfish they caught (Photos)