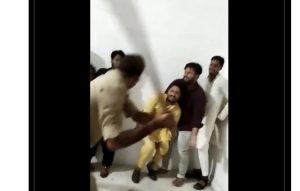 The trashing is brutal and the video has now raised controversies on whether the police had other motives for trashing alleged protesters in that manner.

A video has surfaced online showing nine men begging and trying to block blows raining incessantly on them from two policemen armed with sticks in what looks like a police station.

The video of the incident was shared by an Uttar Pradesh BJP MLA on Twitter with the caption “return gift for rioters” and it has triggered criticism of the cops and allegations of police brutality by the opposition.

Mr Tripathi shared no details of where the incident took place or when.

Reports have it that the video was shot two days ago in a police station in Saharanpur, where protests and clashes erupted after Friday prayers over the controversial remarks against Prophet Muhammad by two former BJP spokespersons.

Responding to questions about the video, senior police officer Prashant Kumar told NDTV, “We don’t subscribe to such things. We are investigating. And in case these things are true then we will take action against the erring police officers, We are examining it (the video)… it is a serious thing. We are aware of our responsibility.”

“Questions should be raised about such police stations… UP is No. 1 in custodial deaths, it is a leader in human rights violations and abuse of Dalits,” the Samajwadi Party chief said.

Saxon is a prolific writer with passion for the unusual. I believe the bizarre world is always exciting so keeping you up to date with such stories is my pleasure
Previous Watch: Cat Narrowly Survives An Attack By Coyote On Porch of US Beach House
Next Nigerian Pastor shows up in church with a gun (video)