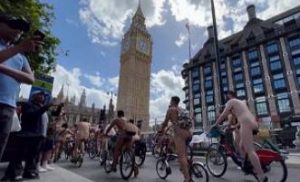 Cyclists numbering about 500, on Saturday, June 11, rode in Mexico City to demand safety and respect for their right. This includes making pedestrians and cyclists visible and exhibiting their vulnerability when traveling through the streets.
The 15th Naked Bike Ride in the Mexican capital, organized by the global collective World Naked Bike Ride (WNBR), began at 11:30 a.m. local time (5:30 p.m. GMT) at the Monument to the Revolution in Mexico City.
The ride involved about 500 naked cyclists, mostly men, who toured the streets of the city, including the emblematic Paseo de la Reforma, heading to the city’s Zócalo, the main square of the Mexican capital, with the aim of making themselves visible to the eyes of those who, they said, do not normally see them. 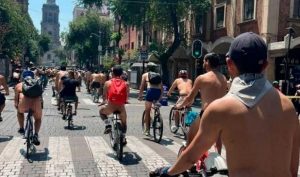 Along the route, passers-by saw in surprise the cyclists, most of them naked or semi-naked, some of whom only wore a mask or had makeup on their faces.
Some of the riders used this opportunity to make the LGBTQ community visible within the framework of gay pride month.
The latest report from the capital’s Mobility Secretariat (Semovi) indicated that during the first quarter of 2022 at least four cyclists have died in traffic accidents.
According to the unofficial count made by activist groups, in 2021, 27 cyclists died in the Mexican capital due to traffic accidents.

Saxon is a prolific writer with passion for the unusual. I believe the bizarre world is always exciting so keeping you up to date with such stories is my pleasure
Previous Hours after CCTV footage of man stealing IPhone 13 Pro-max went viral, his family calls shop owner to apologize and return stolen phone
Next 2 people fall inside chocolate tank at M&M Mars facility in Pennsylvania, rescued by officials