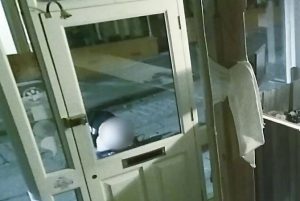 He couldn’t believe a human being to engage in such act so he initially thought it was a giant dog but what he saw on CCTV left him horrified.

The owner of an independent clothing shop in Folkestone, Kent, has been left terrified after finding out that the pile of poo found outside the shop belonged to a woman not any kind of animal.

Colin White, the shop owner in Kent arrived one morning to see the poo and had to clean it up thinking a dog did its business on the pavement outside his store.

Mr. White felt the poo was too big and wondered which size of dog it came from so he went back to check his CCTV and it turned out that the culprit was not a dog at all. 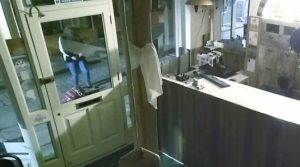 To his utmost surprise he found out it was actually a woman who had decided to take a dump right outside his shop in Folkestone, Kent.

Disgusting footage captured the moment she bent down and undid her jeans before leaving the mess in the middle of the path at around 10pm on Tuesday night.

Mr. White who owns independent clothing business The Quarter Masters arrived at work to see the poo outside his shop in the Old High Street.

At first he thought it might be from a large dog and took it upon himself to clean up as much as he could before neighbours and shop staff teamed up to wash it away with bleach and water.

Mr. White became horrified after he took a look at CCTV to discover the culprit was actually a human. 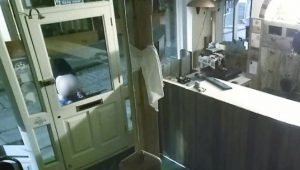 Mr White said: “We are very vigilant in The Old High Street and want to keep it looking nice because we’re proud of it here.

“It was a particularly large deposit which seemed weird so my suspicions were aroused from the get go.

“I always keep poo bags in the shop so I triple-bagged it and I picked up what I could because someone had trodden in it.

“I thought it would be great if we could figure out whose dog did it so I looked at my CCTV. When I saw what happened, it was a bizarre and amazing thing to witness.

“It turns out it happened about 10pm at night so it wasn’t even that late. It was about one metre away from a bin too. It was a harrowing start to the morning. I’m glad it didn’t happen last week as it was half term and it was very busy and it would have been a nightmare.”

Kent Police said no report on this incident has been reported to their officers.

Saxon is a prolific writer with passion for the unusual. I believe the bizarre world is always exciting so keeping you up to date with such stories is my pleasure
Previous Stunned man calls out Nigerian hotel for using local cooking pot as washbasin in bathroom (Photo)
Next Outrage as dentist bans obese patients weighing more than 20st over fears chairs won’t cope