This incident happened in Lagos, Nigeria and it is common to see either touts or road transport officials usually extorting money from commercial vehicle owners but this particular driver is not buying that pressure this time.

A video shared online captured the moment two men clung on a moving car in order to settle an issue with the person in the car. 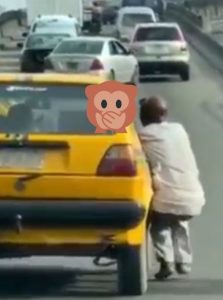 From the video it could be seen that the driver of the vehicle refused to stop the car and the two men decided to cling to the vehicle while it was moving on a major road with other vehicles. 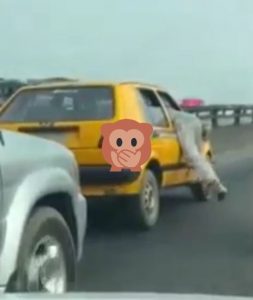 At some point it looked like one of them began to struggle for the steering wheel with the driver even as the vehicle moved.

Saxon is a prolific writer with passion for the unusual. I believe the bizarre world is always exciting so keeping you up to date with such stories is my pleasure
Previous Watch as lady forcefully kisses artiste during live stage performance in Australia
Next Watch: Cat Narrowly Survives An Attack By Coyote On Porch of US Beach House