Two fishermen were stunned to discover that some strange lumps on a fish they reeled in was actually a huge sex toy it had swallowed.

When Jon landed the catfish at a river in Lawrenceburg, the first ever blue catfish he’d hooked, the pair initially assumed it had swallowed some eggs or a smaller creature. 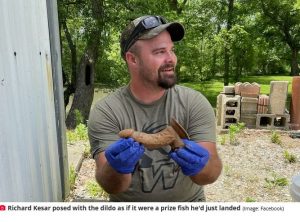 However, when they prodded the fish’s bloated belly they felt two hard objects which didn’t feel like anything typically found in a fish’s diet.

“We noticed when we got it in the boat that its stomach was huge,” Richard told WTTV-TV.

“We decided to cut it open, and we found the foam ball, part of a fish, and the other object.”

The “other object” was in fact the large plastic phallus.

Richard shared snaps of the raunchy haul on Facebook, alongside the caption: “Well we had a pretty interesting fishing trip this morning, we noticed the stomach was hard but didn’t expect this to come out of it.”

Saxon is a prolific writer with passion for the unusual. I believe the bizarre world is always exciting so keeping you up to date with such stories is my pleasure
Previous 2 people fall inside chocolate tank at M&M Mars facility in Pennsylvania, rescued by officials
Next Prince Harry falls off horse at the polo