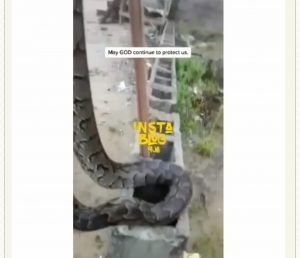 What may have been a tragic situation was averted after a huge python was killed in a house where a lady was residing with her six children.

The exact town where this happened was my clearly known from the video but it to place somewhere in Southwest Nigeria.

A video which was posted on social media shows the dead python on display as a man explained where it was killed.

The man could be heard advising people who live in the area to be careful as no one knew how many more of such snakes were still around the vicinity.

Saxon is a prolific writer with passion for the unusual. I believe the bizarre world is always exciting so keeping you up to date with such stories is my pleasure
Previous Mum hands over her son to police after he confessed to raping their 68-year-old neighbour in her home
Next Father, 70, is arrested for ‘raping his 34 year old daughter, on a deserted beach while she was drunk’