Three men are currently in trouble after falling for a cheap decoy liquor bottle they probably thought was real.

Authorities in Houston, Texas, are haunting for three men caught on camera robbing a liquor store and running off with a cheap decoy liquor bottle they presumably believed to be real.

The Houston Police Department just released the video though the incident took place in the afternoon on May 23. Police says that was the day these three unidentified Black males walked into a liquor store and crowded around a locked display case of alcohol, KRIV-TV reported.

The men then reportedly asked about a $4,200 bottle that was in the case and an employee of the store came over and unlocked the case. 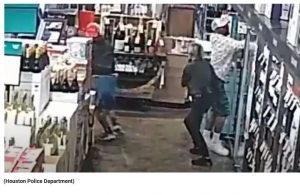 Reports say the three men are still at large.

The third suspect had a visible goatee and wore a black jacket with blue jeans.

A cash reward of up to $5,000 is being offered by Crime Stoppers of Houston for any information leading to an arrest.

Saxon is a prolific writer with passion for the unusual. I believe the bizarre world is always exciting so keeping you up to date with such stories is my pleasure
Previous Pastor fails party primaries after telling his congregation that God told him he’ll be President
Next Dramatic video shows ‘Spider-Man’ crashing heavily through rooftop during failed stunt at Disney California Adventure Park (viral video)