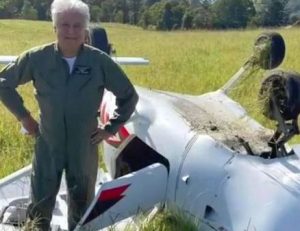 The dramatic moment a plane involved in an emergency landing flipped upside down and crashed on grassland was captured on video.

Pilot Vic Pisani was flying over Gympie in Queensland, Australia, when his plane’s propeller stopped after his engine stalled mid-flight on the morning of Monday, June 13.

He was 2,500 feet in the air and had just three minutes to pick a field to land in.

The incident was witnessed by Matt Frost and Marty Reinwald. They filmed the white, light aircraft as it quickly come down over the field before flipping over into the dirt of a Kandanga paddock while they were on a cigarette break.

Pisani told the Today Show this morning, June 14: “I selected three fields. One I couldn’t get into. The second one looked great but it had livestock all over it so I had to give that one away.

“I had no choice but to put it down where I did next to the house. [It] wasn’t probably as terrifying for myself as it was for the people on the ground who thought I might have damaged something.”

The witnesses flocked to the pilot’s aid as soon as he crashlanded.

Frost told the broadcaster: “We were sitting down having a smoko and we could hear Vic’s plane flying past and I had a look and then a couple of seconds later, we heard the engines cut.

“We probably watched it for maybe 20 seconds, thinking it might just be a training drill, but after about 30 seconds later, we realised he was in trouble.”

The pair feared that the plane would burst into flames at any moment. But as they got closer to the wreckage, they saw the pilot making his way out unscathed.

The pilot, who has over 30 years of flying experience, said that the incident was his first-ever emergency landing and appreciated the help from the men on the ground.

He explained: “Thanks to training, I ticked off all the checklists on the emergency checklist. Those guys were down there in minutes and I much appreciate the help and sorry to scare them.

“Apart from hitting a patch of soft ground and flipping it, which was the resulting crash, it would have been a nice forced landing.”

Watch videos from the scene below.

Saxon is a prolific writer with passion for the unusual. I believe the bizarre world is always exciting so keeping you up to date with such stories is my pleasure
Previous Man Commits Suicide After His Girlfriend Married Another Man
Next Bolivia Boy, 11, falls into coma and dies after four brothers ‘repeatedly raped him and gave him HIV’