Viral Video: 4 women beat up pizza chain employee for allegedly staring at them 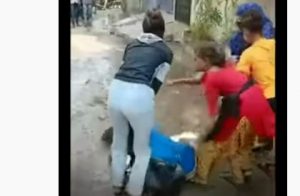 A dramatic video has surfaced online showing the moment a pizza chain female employee was getting beaten up by four more women.

The victim is said to be a staff of Domino pizza chain.

The incident took place in Indore, Madhya Pradesh, India, and it was gathered that the four women thrashed the pizza chain employee for allegedly staring at them.

The incident was caught on camera and shared on Twitter.

The video shows the four women mercilessly thrashing the employee who falls to the ground crying out in pain and nobody attempted to help her.

When the pizza chain employee said she would call the police, one of the women dared her to do so by saying “Go file a complaint”.

A young woman was mercilessly thrashed, grabbed by the hair in full public view by a group of women in Indore. The video of the incident shows four women beating up the victim, a pizza chain employee, using sticks and fists, for allegedly staring at them @ndtv @ndtvindia pic.twitter.com/R6l2epYLpJ

A police case has been registered against the four women who were thrashing the pizza employee. The case was based on complaints laid by the victim.

The accused women are allegedly a part of a local gang.

It was reported that the video of the assault was allegedly made viral by the gang itself.

Saxon is a prolific writer with passion for the unusual. I believe the bizarre world is always exciting so keeping you up to date with such stories is my pleasure
Previous Watch As Smaller Kingsnake Swallows Bigger Rattle Snake In Terrifying Video
Next Nigerian woman arrested after she broke her little nephew’s head because he misplaced 24 cents (video)