Boy dies after getting stuck between dryer and washing machine 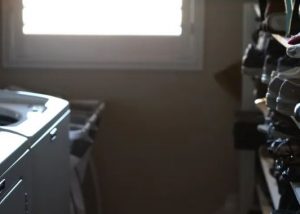 A young boy has died after getting stuck between a washing machine and dryer while playing hide and seek.

The sad incident happened last Friday evening after emergency services rushed to his grandparents’ home on getting information that the child, aged between eight and ten, had become trapped.

The young boy, from Georgia, USA, had been playing with his cousins and family members when the accident at the family home, The Sun reports.

Tim Watkins, from the local Sheriff’s office, said it is believed the little boy, who is originally from Texas, was trying to hide behind the appliances when he got stuck between them.

When the family searched for him for about five to ten minutes, they eventually found him and immediately began performing CPR, local news outlet WCTV reported.

Despite continued efforts, paramedics were unable to revive the boy. He was transported to a local hospital where he was pronounced dead.

According to Watkins, it is believed he may have died from positional asphyxiation. There was no trauma to the little boy’s body.

The Sheriff’s Office confirmed no charges have been brought against the family.

An official autopsy will be performed on June 15.

Local residents have expressed their shock at the tragic news. Many have taken to social media to share their condolences.

“How tragic! Praying that the family is able to find some kind of peace during these most unfortunate circumstances,” one woman wrote on Facebook.

“Breaks my heart, he probably had anxiety which made his breathing harder,” another responded. “Poor family, this had to be devastating since he was only here visiting his grandparents.”

“Sincere Condolences to the family here and in Texas,” one mother wrote.

While one dad said: “It breaks my heart! Kids just playing and having fun.”

Saxon is a prolific writer with passion for the unusual. I believe the bizarre world is always exciting so keeping you up to date with such stories is my pleasure
Previous Depraved dad, 56, is jailed for 9 months after filming himself having sex with his dog and sending the video on Facebook Messenger
Next Pregnant woman decapitated before her baby shower with head found in bin, ex-boyfriend charged with her murder