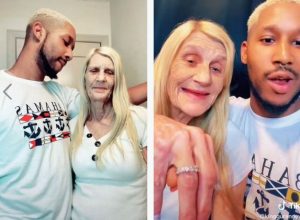 She already has 17 grand children and there is a 37-year gap between her and her partner. Now they want to get to the next level of having their own child.

A granny has concluded plans to have a baby with her 24-year-old husband. The new baby will add to her brood of 17 grandchildren in doing so.

Gran Cheryl, 61, who was only identified only by her first name, married Qaran McCain from Georgia, in the US, in September last year after dating for around a year.

The couple had already made headlines thanks to their 37-year age gap. Their TikTok account @kingqurannewpage had racked up more than 2.2million followers, with Quran having proposed to Cheryl with a ring crowdfunded by his online fans.

Their wedding, a riverside ceremony in Tennessee, was live-streamed to more than 20,000 people, reports Mirror.

Qaran and Cheryl insist that their love is real and they say they are now ready to make the next move and have a baby together.

Though they are not yet sure whether this would happen through adoption or by using a surrogate, they have already started pram shopping. 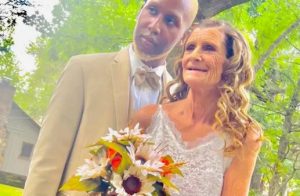 Cheryl has said most of her family were supportive of the decision and her 17 grandkids already called Qaran “pawpaw”.

The gran said the pair had spoken of wanting to have a family together.

“He’s always wanted children and I want to be the mother to his child,” she said.

“Of course, because of my age we’ll have to get a surrogate or adopt which we’re looking into,” she added.

Caretaker Quaran met Cheryl in 2012 when he was working at Dairy Queen in Rome, Georgia, which was owned by her son Chris.

The pair lost contact for a while but reconnected on November 4, 2020, when Quran saw mum-of-seven Cheryl working as a cashier at a convenience store.

They started dating and Quran sealed the deal by proposing in July 2021.

In September last year they eloped to Tennessee with just two friends to witness their nuptials. However, they planned to renew their vows this year, surrounded by all of their friends and family.

Cherryl’s even children – who range in age from 29 to 41 – have said they will help to raise their baby.

Saxon is a prolific writer with passion for the unusual. I believe the bizarre world is always exciting so keeping you up to date with such stories is my pleasure
Previous Mum ties up 5-year-old daughter, leaves her on roof in scotching heat for ‘not finishing her homework’ (Video)
Next Mother kills her 4-year-old daughter over bond with dad’s new girlfriend