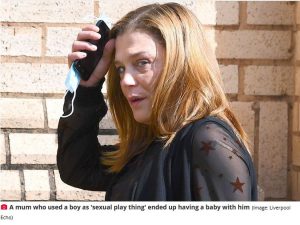 A 40-year-old woman has been jailed after she used an underage boy as her ‘sexual play thing’ and had had a child with him.

Sarah Campbell had sex with her victim on a golf course including the period others were sleeping in the same room, reports the Liverpool Echo.

Martine Snowdon, prosecuting, said Campbell and the boy “They would ‘get off their barnets’ regularly, as [the victim] put it” by “smoking cannabis and taking cocaine provided by her.”

She added that the mum attempted to avoid detection by social services and other people by getting him to sneak into her house at odd times of day and hide. 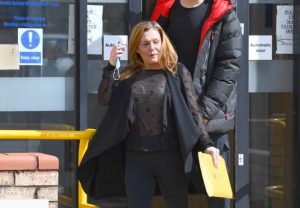 When Campbell became pregnant with the victim’s child she was charged with multiple sexual offences.

According to prosecutors, Campbell had caused “further anguish” when she suggested the boy had in fact raped her.

She was later convicted in her absence after fleeing when the trial commenced last year.

Simon Christie, defending, said Campbell was herself a victim of abuse and was trying to get counselling for this in prison while also using her time there positively, reports Daily Star.

Mr Christie said: “The defendant, in her first experience of custody, has put her time to good use already. She has been given responsibility as a wing cleaner.” 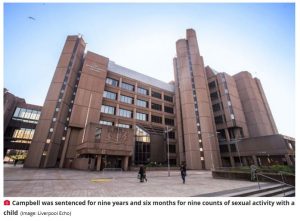 Judge Ian Harris told an upset Campbell that her actions had robbed the boy of part of his childhood, and said she had used him as her own “sexual play thing”.

She was jailed for a total of nine years and six months for nine counts of sexual activity with a child. After her sentence was passed, a family member in the public gallery told Campbell to “hold your head up high” as she stood distraught in the dock.

Vanko is a cheerful writer whose enthusiasm for unusual stories is inspiring.
Previous Wife batters husband to death then gets her butcher sons to chop up his corpse and spread around town
Next Estranged husband fatally stabs his police wife eight times for allegedly cheating with fellow officer (video)