Home / Asia / Woman confesses to hiring hitman who killed her husband, claims he physically abused her and had illicit affairs with other women

Woman confesses to hiring hitman who killed her husband, claims he physically abused her and had illicit affairs with other women 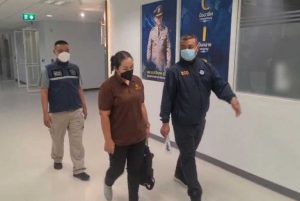 A woman in Thailand is currently in trouble after admitting she hired the gunman who killed her husband.

Charoensri Thongkham, 41, told police she was angered by his many affairs with other women and his frequent physical abuse.

Thongkham was wanted on an arrest warrant issued in 2014 by the Chaiya Disitrict Court in Surat Thani.

She was charged with masterminding her husband’s murder, theft and breaching the Firearms Act.

When CSD investigators tracked her down she was working as a masseuse in Bang Khen district, and was arrested there on Tuesday June 14.

While she was being interrogated, Thongkham told police she had lived with her husband for 11 years.

Thongkham added that her husband had changed a lot and had affairs with other women. She said he had spent money she earned and gave it to those women.

She alleged that she learned what was going on they had quarrelled frequently and he often physically assaulted her.

She said she loved him dearly but was gripped by the fear he might kill her some day, because he often carried a gun, so she hired a gunman to kill him first. It cost her 100,000 baht.

When the gunman killed her husband he allegedly stole his gold necklace, weighing five baht, and his gun. She fled to Bangkok before she could be arrested.

Thongkham is presently in police custody.

Saxon is a prolific writer with passion for the unusual. I believe the bizarre world is always exciting so keeping you up to date with such stories is my pleasure
Previous Estranged husband fatally stabs his police wife eight times for allegedly cheating with fellow officer (video)
Next Depraved dad, 56, is jailed for 9 months after filming himself having sex with his dog and sending the video on Facebook Messenger