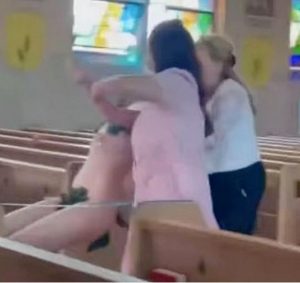 A church service in Detroit was momentarily disrupted when some pro-choice abortion right activists went unclad to drive their message home.

The women protesting for abortion rights in the US were filmed stripping naked during a service at a pro-life church.

The naked protest which took place on Sunday, June 12, was captured on video and shared online.

In one of the videos shared online, a woman is seen standing on one of the pews with only fake leaves covering her private parts. 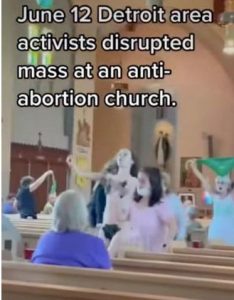 Other fully clothed protesters with handprints on their breasts stood by her side chanting: “Abortion is our policy.”

Church members eventually grabbed the woman by both of her arms and forced her to leave the church.

Her accomplice was also escorted out of the church.

A video of the incident was shared on Instagram by @feminist with the caption: “Activists protested their right to abortion during a Sunday Mass.

Saxon is a prolific writer with passion for the unusual. I believe the bizarre world is always exciting so keeping you up to date with such stories is my pleasure
Previous Nigerian man and his American lover under drug influence walk in the street naked, attempt suicide saying they will “die and rise on the third day” (Video)
Next Video: Abortion rights activists strip to protest inside Joel Osteen’s Texas megachurch