Home / Asia / Boy Rescued After He Was Trapped For 4 Days in Well With a Snake and Scorpion (Photos, Video)

Boy Rescued After He Was Trapped For 4 Days in Well With a Snake and Scorpion (Photos, Video) 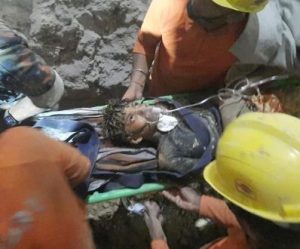 An 11-year-old boy has survived a nightmarish experience trapped in a well for four days with a snake and scorpion.

Authorities in central India spent about four days trying to save the boy’s life after they received a distress call that the boy had accidentally fallen into the well.

The boy named Rahul fell down a boarded up borewell tunnel. 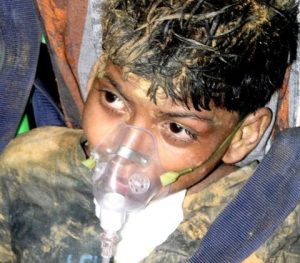 The rescue operation involved more than 30 workers who worked through the night to get the boy out.

At a point it was clear time was fast running out because borewell tunnels typically have low oxygen levels, making survival rare.

The rescuers also saw a snake and a scorpion on the monitor which was used to observe the tunnel while the rescue effort went on. But the boy was not bitten. 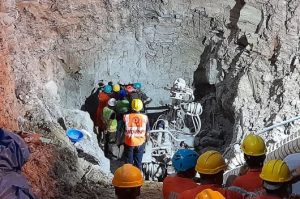 The rescue effort was delayed by bad weather and the unearthing of poisonous snakes and scorpions through the digging.

But after 105 hours of effort Rahul – who reportedly has speech difficulties and is hard of hearing – was pulled out of the hole at 11pm on Tuesday, June 14. 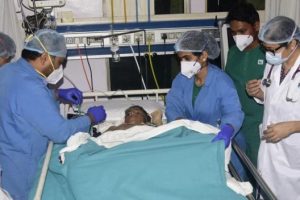 They found he was alive and breathing, and he was immediately taken into the care of two ambulances waiting at the scene.

An oxygen pipe was fed down the well to give him fresh air, and he was passed down food like bananas.

The chief minister of Chhattisgarh, Bhupesh Baghel, said: “With everyone’s prayers and the relentless, dedicated efforts of the rescue team, Rahul Sahu has been brought out safely.

“It is our wish that he recovers completely as soon as possible. Our boy is brave. A snake and a frog were his companions for 104 hours.

“Today the whole of Chhattisgarh is celebrating… we all wish for his return from hospital soon.

“Congratulations and thanks again to all the team involved in this operation.”

The boy is said to be in intensive care in Apollo Hospital in Bilaspur, but he is in a stable condition.

Saxon is a prolific writer with passion for the unusual. I believe the bizarre world is always exciting so keeping you up to date with such stories is my pleasure
Previous Care home worker haunted by washing dead bodies at work takes commits suicide
Next Watch: Teen saves woman who accidentally plunged her SUV into water