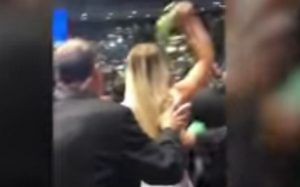 This happened right inside the megachurch just after a prayer session when everyone began to sit down. A group of women stood up and stripped to their underwear to in pro-life abortion protest.

The abortion activists stripped down and interrupted the Sunday service on June 12, causing a momentary commotion in the church during the 11 a.m. service..

This happened after Osteen had finished leading a prayer and congregants began to sit down. The women stood up and began chanting, “my body, my (expletive choice).”

Two of the women removed their dresses, with one shouting, “Overturn Roe, hell no!”

The video footage of the protest quickly went viral over Twitter and the 11 a.m. service’s live stream has since been taken down.

Saxon is a prolific writer with passion for the unusual. I believe the bizarre world is always exciting so keeping you up to date with such stories is my pleasure
Previous Abortion rights activists strip naked during church service in Detroit as part of pro-choice protest
Next Mum falls 50ft to her death from balcony as children wait in car to go on holiday