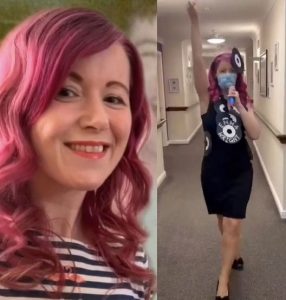 She also let her students smoke, pose in swimwear and make offensive gestures in uniform.

Due to this misconduct she has now been banned from teaching indefinitely after overseeing the class for a school art project at Huxlow Science College in Northamptonshire.

Mrs Wright was struck off after the Teaching Regulation Agency (TRA) decided she had broken safeguarding rules.

She had initially been reported to the TRA in 2018 by the school’s head of art and design, who had come across her teenage students’ portfolios of work.

Defending herself to the panel, Mrs Wright said she had introduced the pupils to a new artist who created “suggestive pictures” but insisted that she never told the students to create similar work.

She added that she did not deem the artist’s work to be sexual in nature, but accepted that she should have told the pupils their photographs were not appropriate. 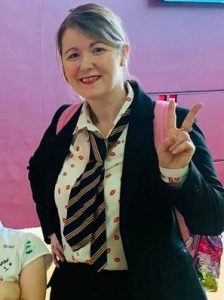 Mrs Wright was found to have committed a serious breach of professional teaching standards while failing to safeguard pupils’ well-being.

The panel’s decision-maker Alan Meyrick concluded: “Whilst the panel was satisfied that there was a low risk of repetition, it did not find that Mrs Wright had fully reflected on the safeguarding implications of allowing pupils to take photographs of themselves or others in a state of undress.

“The risk of harm, due to the lack of safeguarding pupils, was a significant factor in forming that opinion.

“In my view, it is necessary to impose a prohibition order in order to maintain public confidence in the profession.”

The situation worsened for Mrs Wright after she informed a colleague of her suspension despite being under instructions from the school not to discuss the situation.

Mrs Wright cannot apply for a review of her ban until 2024.

Saxon is a prolific writer with passion for the unusual. I believe the bizarre world is always exciting so keeping you up to date with such stories is my pleasure
Previous Woman, 22, held captive for months by roommate who raped, tortured and cut her tongue out
Next Zookeeper dies as tiger bites off his arm after he stuck it through fence during feeding time (Horrifying graphic video)