Home / Africa / Man and his cow electrocuted to death (video)

Man and his cow electrocuted to death (video) 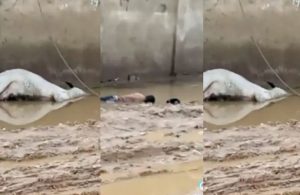 A man and his cow have died after they were reportedly electrocuted following a heavy downpour which left some parts of Accra, Ghana’s capital flooded.

Reports say the man and his cow were electrocuted to death after a wire from a high tension pole fell into a mass of water after the rainfall.

The man who was not aware of the impending danger, decided to use that route to escape the muddy path at the other side only to be killed instantly by the wire interacting with the water.

A viral video shows the scene of the incident with the man and his cow still lying lifeless in the muddy water.

In the video a man was heard saying that a distress call has been placed to power authorities to come and fix the situation to void another disaster, but they are yet to respond.

Saxon is a prolific writer with passion for the unusual. I believe the bizarre world is always exciting so keeping you up to date with such stories is my pleasure
Previous Woman whose left leg is more than double the size of her right leg due to a rare condition says she gets rude remarks from strangers (photos)
Next Passengers forced to flee as bus suddenly explodes (Photos)