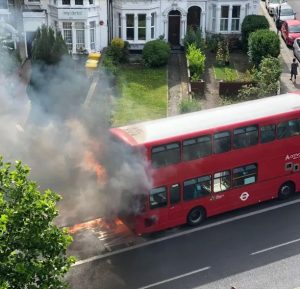 There was pandemonium in Streatham Hill, South London on Friday, July 17, after a bus suddenly exploded into flames in the morning as horrified passengers fled in terror.

Firefighters reportedly rushed to the scene after they got information about the incident, as huge flames engulfed the double decker.

From the scene of the incident an orange fireball could be seen erupting from the vehicle as thick clouds of smoke billowed through the air.

Meanwhile, horrified passers-by watched on in horror, with many taking to Twitter to report the dramatic scenes, reports Daily Sun. 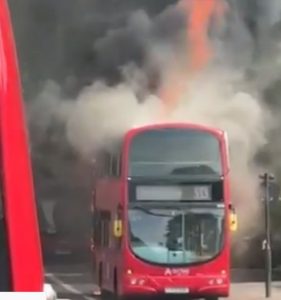 One witness wrote: “Bus in Brixton pulled into the stop and promptly caught on fire.

“Huge flames & crashing as bits of it were burned off. Stay safe in the heat!”

It is not yet clear how many people were onboard when the bus caught alight shortly before 10am.

London Fire Brigade confirmed the driver and passengers were all forced to leave the bus for safety, although no injuries were reported.

A spokesperson for the fire service, said: “Firefighters were called to a bus alight on Christchurch Road in Streatham Hill. 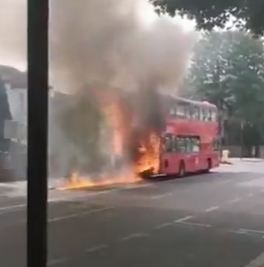 “Part of a double decker bus was damaged by fire. The driver and passengers left the bus before the Brigade arrived. There were no reports of any injuries.

“The Brigade’s 999 Control Officers took 19 calls to the blaze.

“The Brigade was called at 0950 and the fire was under control by 1022. One fire engine from Brixton Fire Station attended the scene.” 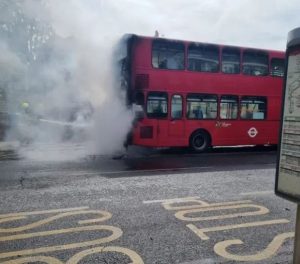 Marlon Osborne, Head of Operations at TfL, said: “The incident on a bus in Brixton this morning must have been really frightening for those involved.

“Thankfully all passengers were evacuated and there are no injuries.

“We are working closely with the emergency services and the operator to urgently investigate what happened.”

Saxon is a prolific writer with passion for the unusual. I believe the bizarre world is always exciting so keeping you up to date with such stories is my pleasure
Previous Man and his cow electrocuted to death (video)
Next Super market worker spent £140,000 drinking 10 litres of Pepsi every day for 20 years, and that’s about 7 million cubes of sugar so far (photos)