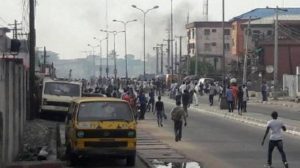 Police in Lagos, Nigeria, on Thursday, June 16, rescued a 53-year-old woman who was almost lynched by a mob after she was accused of touching a baby who allegedly disappeared afterward.

The spokesperson of the state police command, SP Benjamin Hundeyin, who disclosed this on his Twitter handle, said the woman was stripped naked and attacked by the mob.

He added that the police got to the scene on time and were able to rescue the woman.

The police spokesperson emphasized that no one has come forward to complain of their baby is missing.

”We really need to join hands to stop jungle justice. At 1810hrs today (Thursday), people stripped naked a 53 year old woman (names withheld), started stoning her and were on the path of lynching her. This happened at Alasalatu, Mushin.

The allegation was that she touched a baby and the baby disappeared.

Police got there on time to rescue her. Lynch mob was dispersed with teargas. Allegation has not been proven.

No parent/guardian has come forward yet to complain of a missing baby in that locality today. She’s currently at the station. Her husband has been contacted.

Investigation is ongoing. Jungle justice is not the way to go. Say NO to jungle justice!!!”

Saxon is a prolific writer with passion for the unusual. I believe the bizarre world is always exciting so keeping you up to date with such stories is my pleasure
Previous Mom abandons her 3 kids during camping trip on island, flees with boyfriend
Next New Zealand Announces Plan To Tax Farmers For Livestock Farting