Super market worker spent £140,000 drinking 10 litres of Pepsi every day for 20 years, and that’s about 7 million cubes of sugar so far (photos) 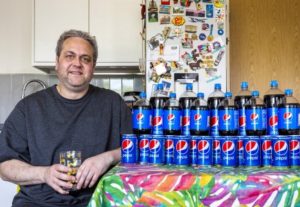 A supermarket worker who drank 30 cans of Pepsi (about 10 liters) every day for 20 years says he has stopped the drinking habit.
He added that he has sipped water for the first time in 20 years now that he has quit the habit.
Andy Currie consumed 10 litres of the Soda drink every day reportedly spending up to £140,000 over two decades.
According to what Andy says, it means that the 41-year-old from Bangor, north Wales has sipped around 219,000 cans of Pepsi – equating to almost 8,000kg of sugar, or 7million sugar cubes since he developed his addiction in his 20s.
Andy said: ‘I’ve always loved the taste of a cold Pepsi. Nothing could beat it and I just got hooked.
‘I work nights so always liked the sugar rush to keep me going. I’d go through four or five two litre bottles of Pepsi every day.
‘Because I work at Tesco I could just buy it straight after work and take it home.”
But Andy says he now regrets his behavior because he could have purchased a car every year with the ‘fortune’ he has spent on his favourite soft drink.
‘I just needed to have it, as soon as I woke up I’d go to the fridge and pour myself a large glass of Pepsi and just carry on through the day.
‘I remember going to weddings and birthdays and while other people had glasses of champagne I’d be toasting people with a can of fizzy pop.’ 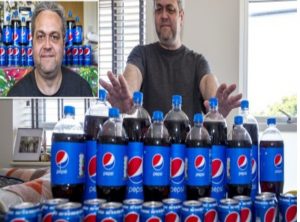 When Andy noticed that his weight soared to 19 stone he then decided this was no longer child’s play and drastic action was necessary to save his health.
He also got medical advice from his doctors who warned he was at risk of developing diabetes.
He managed to shed two stone through diet and exercise but struggled to stop drinking the soft drink.
The solution came when he started online hypnotherapy, as this helped him to drop the habit and he drank water for the first time in 20 years.
Andy said: “David met me online and hypnotised me for about 40 minutes.
“I don’t know what he said but afterwards I just didn’t want to drink it anymore.
“I’ve still got two cans of Pepsi in my fridge which I was going to have before the session but didn’t have time.
“I haven’t touched them in a month and don’t plan to. I prefer water now. My wife Sarah says my skin looks better and I’ve got so much more energy.”

Saxon is a prolific writer with passion for the unusual. I believe the bizarre world is always exciting so keeping you up to date with such stories is my pleasure
Previous Passengers forced to flee as bus suddenly explodes (Photos)
Next Mum saved teenage daughter’s life by fighting off knife-man who stabbed her 22 times in family home