Woman eaten by her 20 pet cats after she collapsed 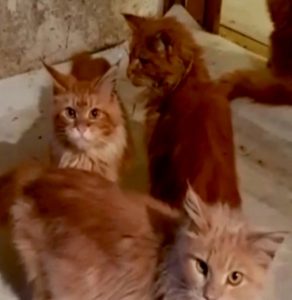 A woman was eaten by her 20 cats after she collapsed at her home and was not discovered by police for two weeks.
One of the woman’s employees alerted the police on the her disappearance and said she had not been able contact her boss.
When police arrived at the home in Bataysk, Rostov region, Russia, they found the partially eaten remains of the woman with the hungry cats surrounding her.
Police believe she had been dead for two weeks as they probed her decomposing remains.
“The cats were left alone on their own for two weeks, there was no food, so what else to eat?” said one animal rescue expert who cared for some of the surviving cats.
“It’s understandable right? They ate what there was.”
The cats have now been given to new owners for just £29 each.
Studies have found that cat owners who die at home risk being eaten alive by their hungry pets.

Saxon is a prolific writer with passion for the unusual. I believe the bizarre world is always exciting so keeping you up to date with such stories is my pleasure
Previous Zookeeper dies as tiger bites off his arm after he stuck it through fence during feeding time (Horrifying graphic video)
Next Woman whose left leg is more than double the size of her right leg due to a rare condition says she gets rude remarks from strangers (photos)